28th February. 2 Hooded Crow were at the north end of the reserve. On Jackson's Marsh were a drake Pintail, a drake Goldeneye and 7 Black-tailed Godwit; and on Tennyson's Sands were 11 Avocet. Around were 320 Brent Goose, a ringtail Hen Harrier, a Sparrowhawk, 6 Woodcock, a Goldcrest, a Coal Tit, 40 Redwing, 5 Mistle Thrush, 10 Rock Pipit, a Yellowhammer and 41 Corn Bunting.
A morning ringing session at Aylmer Avenue produced 19 new birds: 8 Great Tit, 8 Goldfinch, 2 Blue Tit and a Chaffinch; and 7 retraps: a Coal Tit, 2 Blue Tit, 2 Long-tailed Tit and 2 Great Tit.


27th February. 2 Common Crossbill were seen in the Beach Car Park in the morning. On the beach were a juvenile Glaucous Gull and 2 Hooded Crow; and on Tennyson's Sands 8 Avocet and 4 Snipe. Birds around included 200 Brent Goose, 7 Eurasian White-fronted Goose, a drake Pintail, 3 Grey Partridge, a ringtail Hen Harrier, a Sparrowhawk, a Woodcock, 2 Snipe, 2 Short-eared Owl, a Merlin, a Goldcrest, a Cetti's Warbler, 2 Mistle Thrush, 2 Rock Pipit and 60 Corn Bunting. Going south were a Red Kite, 2 Marsh Harrier, a Woodlark and 6 Siskin; and north went a Buzzard.

26th February. A Cattle Egret flew south over Tennyson's Sands in the afternoon but was not seen again. 7 Common Crossbill were in Beach Car Park throughout the day and a Cetti's Warbler was heard around Mill Pond. A Grey Partridge was heard from the Visitor Centre at dusk. On Jackson's Marsh were a drake Pintail and a drake Goldeneye. Around were 100 Brent Goose, a Snipe, a Chiffchaff, 2 Fieldfare, 20 Redwing, a Mistle Thrush, 3 Rock Pipit, 4 Siskin, a Yellowhammer and 10 Corn Bunting. In the morning a Brambling and 35 Siskin went south.


25th February. 3 Common Crossbill and a Siskin were in the Beach Car Park throughout the afternoon. 5 Bewick's Swan were on Tennyson's Sands periodically; and a drake Goldeneye was on the Mere. 2 Grey Partridge were heard from the Visitor Centre at dusk. Also around were 10 Whooper Swan, 200 Brent Goose, 7 Eurasian White-fronted Goose, a ringtail Hen Harrier, a Short-eared Owl, a Merlin, 2 Hooded Crow, 2 Fieldfare, 40 Redwing, a Mistle Thrush, a Siskin and 25 Corn Bunting.

24th February. A juvenile Glaucous Gull and a Hooded Crow were on the beach. 3 Water Pipit were on Fenland Lagoon in the afternoon; and from The Wash Viewpoint in the afternoon were 150 Brent Goose (including a Pale-bellied Brent Goose), a Marsh Harrier, a ringtail Hen Harrier, 2 Short-eared Owl and a Merlin. Birds around included 27 Whooper Swan, 5 Bewick's Swan (including 2 adults), 5 Black-tailed Godwit, 2 Woodcock, a Stonechat, 7 Rock Pipit, a Siskin, 3 Yellowhammer and 43 Corn Bunting. 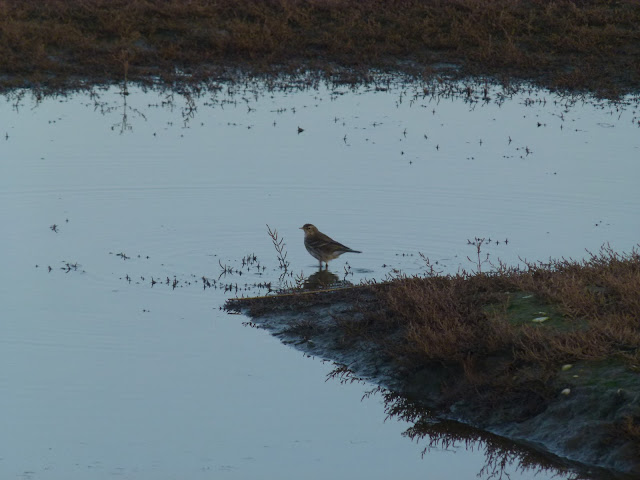 23rd February. 4 Snow Bunting were on the saltings at the north end of the reserve. 3 Hooded Crow and 2 juvenile Glaucous Gull were on the beach. Offshore were 788 Common Scoter, 2 Velvet Scoter and a Great Crested Grebe. 5 Bewick's Swan went to roost on Tennyson's Sands in the evening; and a Water Pipit was on Fenland Lagoon. Birds around included a drake Goldeneye, a ringtail Hen Harrier, 2 Snipe, a Short-eared Owl, 2 Fieldfare, 13 Redwing, a Mistle Thrush, 3 Stonechat, 25 Rock Pipit, a Yellowhammer and 20 Corn Bunting.


22nd February. A Cetti's Warbler and 3 Common Crossbill were in the Beach Car Park. A Eurasian White-fronted Goose was with 600 Pink-footed Goose on Croftmarsh. On Tennyson's Sands throughout the day were 28 Whooper Swan, 5 Bewick's Swan, a Water Rail, an Avocet and 11 Snipe; on the Mere was a drake Goldeneye; and on Fenland Lagoon were a Kingfisher and 2 Water Pipit. Around were 150 Brent Goose, a Pintail, a Red-legged Partridge, a Grey Partridge, a ringtail Hen Harrier, 3 Woodcock, 4 Snipe, a Green Woodpecker, a Hooded Crow, 2 Goldcrest, 2 Coal Tit, a Chiffchaff, 2 Treecreeper, 5 Fieldfare, 6 Redwing, a Mistle Thrush, a Stonechat, 7 Rock Pipit, a Brambling, a Siskin and 16 Corn Bunting. Going north was a Kittiwake; and south went a Gannet, a Great White Egret and a Marsh Harrier. On the sea were 58 Eider and 4 Red-breasted Merganser.

21st February. On the beach was the darker-plumaged juvenile Glaucous Gull and the other pale bird was seen from The Wash Viewpoint in the evening. 2 Hooded Crow were also on the beach. 5 Bewick's Swan went to roost on Tennyson's Sands at 16.55hrs. Also on Tennyson's Sands were a drake Pintail, a Grey Heron, an Avocet and 3 Snipe; and on Jackson's Marsh was a drake Goldeneye. 7 Eurasian White-fronted Goose were on the Freshwater Marsh mid morning. Also around were 41 Whooper Swan, 600 Pink-footed Goose, 322 Brent Goose, a Grey Partridge, a Buzzard, 3 Woodcock, 1 Snipe, a Kingfisher, a Merlin, a Coal Tit, 7 Fieldfare, a Mistle Thrush, a Stonechat, 2 Water Pipit, 8 Rock Pipit, 2 Crossbill and 30 Corn Bunting. Offshore were 440 Eider, 18 Red-breasted Merganser and 2 Great Crested Grebe; and going south were a Black-throated Diver, 2 Red-necked Grebe, an adult Mediterranean Gull, a Woodlark, 5 Siskin and 5 Snow Bunting.

20th February. 12 Common Crossbill were feeding in Beach Car Park in the afternoon; and a Woodlark was seen in West Dunes. A juvenile Glaucous Gull and 2 Hooded Crow were on the beach. 5 Bewick's Swan went to roost on Tennyson's Sands at 17:05. Also on Tennyson's Sands were a drake Pintail and 4 Avocet. The Cetti's Warbler was heard singing at the north of the reserve in the afternoon. Other sightings included 2 Grey Partridge, 2 Hen Harrier (a male and a ringtail), a Woodcock, a Coal Tit, 2 Chiffchaff, 20 Redwing, 3 Rock Pipit and 8 Corn Bunting. 560 Eider and 7 Red-breasted Merganser were on the sea from the Wash Viewpoint in the morning. 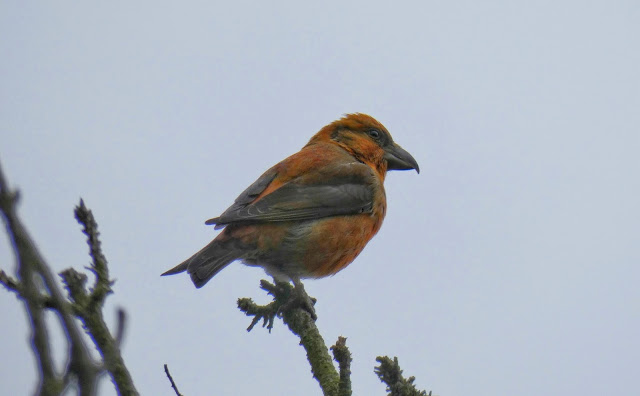 19th February. On the beach were 2 juvenile Glaucous Gull and 2 Hooded Crow. The Cetti's Warbler was singing to the north of the reserve. 6 Eurasian White-fronted Goose were seen to the north of Tennyson's Sands; and 5 Bewick's Swan went to roost on Tennyson's Sands from Harvey's Hide in the evening. 4 Snow Bunting were seen on Millenium Ridge in the afternoon. Other highlights included 38 Whooper Swan, 350 Pink-footed Goose, 377 Brent Goose, 2 Pintail, a drake Goldeneye, 2 Red-legged Partridge, 2 Grey Partridge, a ringtail Hen Harrier, 2 Sparrowhawk, 2 Buzzard, 22 Ringed Plover, 15 Black-tailed Godwit, 2 Woodcock, 4 Snipe, a Merlin, 3 Coal Tit, 9 Fieldfare, 14 Redwing, a Stonechat, 4 Rock Pipit, a Siskin, a Yellowhammer and 48 Corn Bunting. Offshore were 120 Eider and 5 Red-breasted Merganser.

18th February. Seen on Jackson's Marsh were 6 Eurasian White-fronted Goose, a drake Pintail and 4 Black-tailed Godwit. The Cetti's Warbler remained to the north of the reserve, along with a Red-legged Partridge. A juvenile Glaucous Gull, an adult male Hen Harrier and 9 Black-tailed Godwit were seen from the Wash Viewpoint late in the afternoon; and a Grey Partridge was again heard calling from the Visitor Centre Car Park at dusk. Also around were 38 Whooper Swan, 5 Bewick's Swan, 350 Pink-footed Goose, a ringtail Hen Harrier, a Chiffchaff, 2 Water Pipit, a Brambling and 38 Corn Bunting.

17th February. A glorious sunny day on the reserve. Visiting birders were rewarded with excellent views of a Great White Egret, 35 Whooper Swan, 5 Bewick's Swan and 6 Eurasian White-fronted Goose on Jackson's Marsh and Tennyson's Sands. A Cetti's Warbler was singing to the north of the reserve. An afternoon visit to the Wash Viewpoint was rewarded with views of 2 juvenile Glaucous Gull, a Merlin, a ringtail Hen Harrier, 2 Pintail and 2 Black-tailed Godwit. A Grey Partridge was calling at dusk.

Thanks to Paul Neale for some excellent photos from today:

16th February. Surprise highlight of today came in the form of 4 Grey Partridge between the Wash Viewpoint and Visitor Centre Car Park at dusk. Sightings from elsewhere on the reserve today were 2 Hooded Crow, 2 Stonechat, 2 Water Pipit, a Kingfisher, a Peregrine, a Marsh Harrier and 38 Corn Bunting. On Tennyson Sands were 2 Avocet, a drake Pintail and a drake Goldeneye. The 5 Bewick's Swans came into roost at 1635hrs giving good views from Harvey's Hide.

15th February. There was a light movement of finches, corvids and Starlings south early morning, including 3 Brambling. The 2 juvenile Glaucous Gull remained on the beach. On Jackson's Marsh sightings included a male Marsh Harrier, a Grey Heron, a drake Pintail, a ringtail Hen Harrier and 6 Eurasian White-fronted Goose.
The family group of 5 Bewick's Swan came in to roost on Tennyson Sands at 1635hrs; also present were a drake Goosander and a lone Avocet. A Grey Partridge (rare here) was heard calling from the Wash Viewpoint at dusk. Other sightings from around the reserve were 3 Chiffchaff, a Water Pipit, a Siskin, an adult Male Peregrine, a Merlin and 50 Corn Bunting.


14th February. 2 juvenile Glaucous Gull were on the beach along with a Hooded Crow. The group of 5 Bewick's Swan roosted on Tennyson's Sands from Harvey's Hide in the evening. Around were 40 Whooper Swan, 250 Brent Goose (including a Pale-bellied Brent Goose), 250 Wigeon, a drake Goldeneye, a Sparrowhawk, a Buzzard, 13 Snipe, 2 Rock Pipit and 15 Corn Bunting.

13th February. A juvenile Glaucous Gull and 2 Hooded Crow were on the beach. 300 Red-throated Diver and a Black-throated Diver went south in the morning. Around were 3 Song Thrush and a Water Pipit.

12th February. A juvenile Glaucous Gull was on the beach. 5 Bewick's Swan (including 2 adults) were on fields west of the River Steeping with 41 Whooper Swan. The first Avocet of the year was on Tennyson's Sands. Other highlights included 300 Brent Goose, 2 Hen Harrier (a male and a ringtail), a Sparrowhawk, 500 Lapwing, 11 Woodcock, 2 Redwing and 45 Corn Bunting. 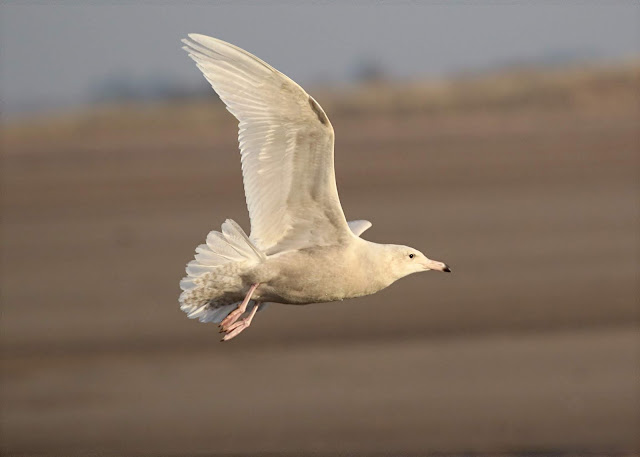 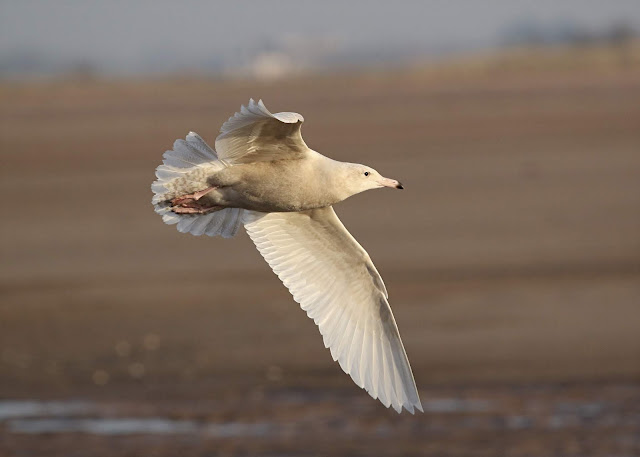 11th February. 2 juvenile Glaucous Gull and 2 Hooded Crow were on the beach. 6 Eurasian White-fronted Goose were on Jackson's Marsh in the morning; and 5 Bewick's Swan went to roost on Tennyson's Sands in the evening. Out to sea were 30 Eider, 60 Common Scoter 17 Red-breasted Merganser and 200 Red-throated Diver. Also around were 300 Brent Goose (including one Pale-bellied Brent Goose), a drake Pintail, a drake Goldeneye, a Grey Heron, a Marsh Harrier, a ringtail Hen Harrier, a Sparrowhawk, a Buzzard, a Water Rail, 2 Black-tailed Godwit, 2 Merlin, a Peregrine, 45 Fieldfare, 8 Redwing, 3 Mistle Thrush, 3 Stonechat, a Grey Wagtail, 10 Rock Pipit and 51 Corn Bunting. A Great White Egret reportedly flew south over the Visitor Centre in the morning. 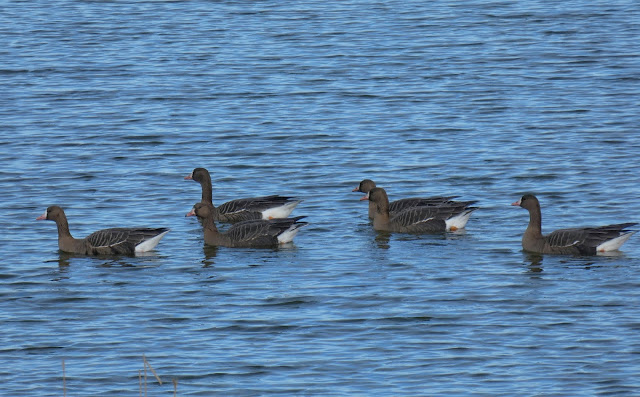 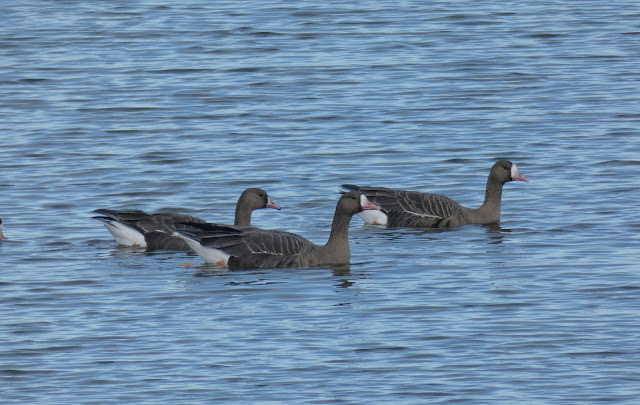