February 28th: A Coal Tit was singing at Aylmer Avenue. Also around were 2 Hen Harriers, 14 Snipes and a Treecreeper. A Marsh Harrier flew north.
A morning ringing session at Aylmer Avenue produced a modest number of the usual species processed.

February 27th: Raptors present included a Marsh Harrier, a Hen Harrier, a Peregrine and 3 Short-eared Owls. Other good birds were 4 Bramblings, a Siskin and a Common Buzzard.

February 26th: The best birds were 3 Bearded Tits and 2 Rooks.

February 25th: Flying to roost on Freshwater Marsh were 40 Lapwings.

February 24th: Quite windy. On the Mere were 4 Goldeneyes, and on Tennyson Sands was a Pintail. Around was a Woodcock. North of the Reserve next to Seacroft Golf Course on wires off Seacroft Road outside No. 240 were 27 Waxwings for most of the afternoon.
A morning ringing session at Aylmer Avenue produced a Brambling, 5 Long-tailed Tits and a Great Spotted Woodpecker, as well as the usual other species. 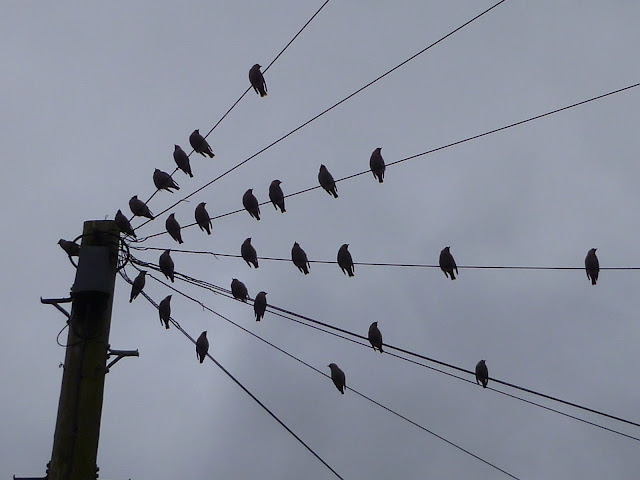 February 23rd: Occasional afternoon snow flurries, which did not settle. On Tennyson Sands were 4 Bearded Tits, and on Croftmarsh the 1000-strong Brent Goose flock. Around was a Merlin. At Seacroft (just north of the reserve) were 23 Waxwings.

February 22nd: The Brent Goose flock on Croftmarsh contained an adult Black Brant. In the Plantation were a Goldcrest and a Woodcock.

February 21st: Cold and windy. On Croftmarsh were 1000 Brent Geese. Otherwise there was little around.
A morning ringing session at Aylmer Avenue was quite successful, although most birds processed were retraps. The best ones were 3 Long-tailed Tits.
A Harbour Porpoise was washed up/stranded on the shore here recently. 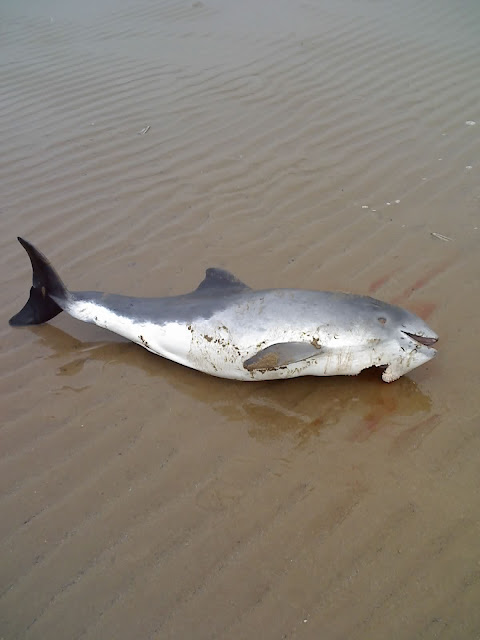 February 20th: Cold. A Bearded Tit was on Tennyson Sands. Other notables were 3 Waxwings, a Lapland Bunting and a Lesser Black-backed Gull.

February 19th: Frosty and foggy start. The morning was spent repairing the Heligoland trap after winter storm damage. Generally quiet, but the Brent Goose flock, about 400 strong, was again mobile.

February 18th: Still mild. On Croftmarsh were a Marsh Harrier and a Buzzard, and on the water bodies 2 Pochards and a Goldeneye.
An afternoon ringing session at Aylmer Avenue produced the usual species in modest numbers.

February 17th: Mild again. A Marsh Harrier was over Croftmarsh. Around were 2 Siskins. The flock of 20 Waxwings was still at Seacroft (just north of the reserve).
A morning ringing session at Aylmer Avenue was moderately successful, with 4 Long-tailed Tits and the usual other tits and finches processed.

February 16th: Mild. Around were a Snow Bunting, 40 Corn Buntings, 2 Hen Harriers, a Buzzard, 8 Woodcocks, 4 Bramblings, 3 Water Pipits and 2 Short-eared Owls. The big Golden Plover and Lapwing flocks kept mostly across the River Steeping. Flying south were 30 Siskins and west 90 Pink-footed Geese. At Seacroft (just north of the reserve) were 20 Waxwings again.
In the moth traps were 3 March Moths and 13 Pale Brindled Beauties.

February 15th: Fairly mild. On the Mere was a Bearded Tit, and on Croftmarsh were 6000 Golden Plovers and 1000 Lapwings. Other notables were 2 Jack Snipes, a Water Pipit, a Hen Harrier and 4 Goldcrests. On Seacroft Golf Course (just north of the reserve) were 20 Waxwings.
On a morning ringing session at Aylmer Avenue 10 Long-tailed Tits were caught, as well as the usual other species.

February 13th: Cold and windy. The best birds were 4 Snow Buntings, a Purple Sandpiper, a Merlin, 67 Turnstones and 3 Song Thrushes.

February 12th: Cloudy but generally milder than yesterday. A Woodcock was in the Plantation. The Brent Goose flock, about 400 strong, was quite mobile. A Little Gull and 4 Kittiwakes went north, and 83 Eiders were offshore. Also present were 4 Snow Buntings, a Buzzard and 41 Corn Buntings.

February 11th: Fairly windy and fairly cold. At sea a Fulmar flew south. On Croftmarsh were 200 Golden Plovers. A Pale-bellied Brent Goose, the Black Brant x Dark-bellied Brent Goose intergrade and 27 Corn Buntings were around.
Posted by GPBO Team at 2:34 pm No comments:

February 10th: On and off light rain, making a miserable day. The only notables were 2 Goldcrests and a Water Rail.
The usual common birds were processed in a restricted morning ringing session at Aylmer Avenue.

February 7th: Overnight wintry shower, frosty start, slowly became a bit milder. Offshore was an unseasonal Sooty Shearwater. On Croftmarsh, oddly, were 14 Turnstones. A Mistle Thush was in song. The most notable others were a Jack Snipe and a Water Pipit.
The best birds on a morning ringing session at Aylmer Avenue were 2 new Siskins.
Alan Brewster has kindly sent us his photographs of the Woodlarks seen here on January 31st. 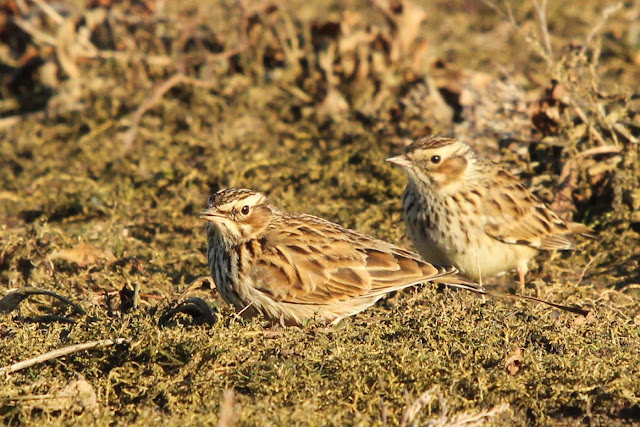 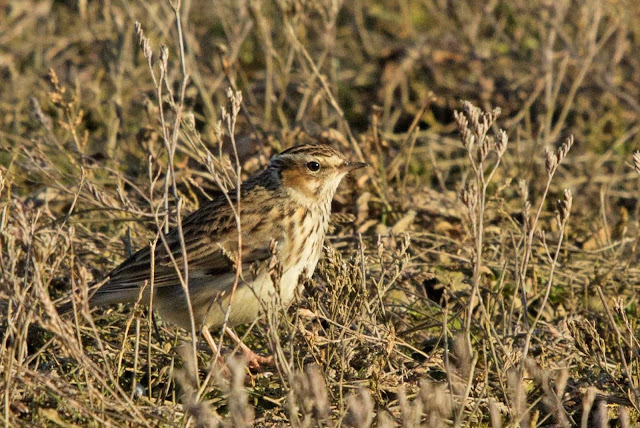 February 6th: Rain on and off all day, reducing coverage. At sea 140 Kittiwakes flew south. A Goldcrest was around.

February 5th: Wintry shower overnight, then windy with sun and clouds. Heading south were 6 Siskins. Otherwise 2 Waxwings and a Water Rail were of note.
A Song Thrush has been using a stone near the Heligoland trap as an anvil. 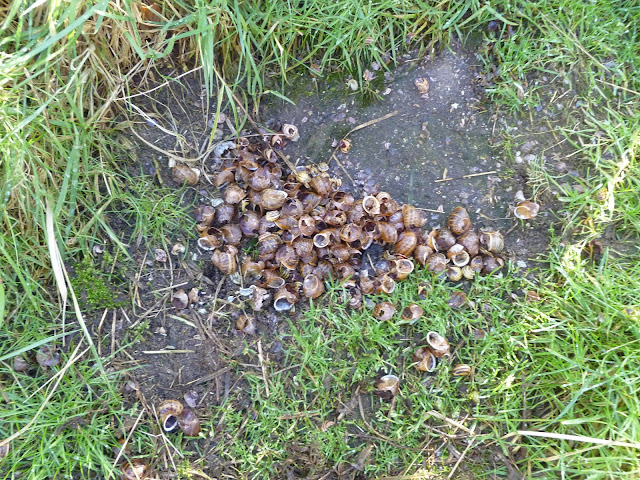 February 4th: Strong westerly wind still. The best birds around were 2 Waxwings, a Shorelark, a Buzzard and a Marsh Harrier. On the water bodies were a Pintail and 4 Goldeneyes.

February 3rd: Cold, strong westerly wind. Around were 2 Waxwings, 5 Woodcocks, a Merlin, a Peregrine, 10 Redwings, a Coal Tit, 2 Goldcrests and 3 Snow Buntings. A Purple Sandpiper and 52 Turnstones were on the beach, a Shag was offshore, and a Fulmar went north.
A brief morning ringing session at Aylmer Avenue produced just the usual finches and tits.

February 2nd: Snow and hail from just before first light covered the ground first thing before melting through the morning as temperatures rose. There was an occasional light hail or rain shower for much of the day with intermittent cloud and periods of warm sunshine.
At sea 710 Kittiwakes headed south, while on the reserve were 2 Coal Tits, 3 Bramblings and 6 Goldeneyes.
Ringing at Aylmer Avenue by Mick Briggs from 11am until 4pm (late start again due to work!) resulted in the 17 New and 31 Retraps. Birds were thus (New/Retraps) - (0/1) Dunnock, (0/2) Robin, (4/1) Blackbird, (0/2) Blue Tit, (1/1) Great Tit, (4/2) Chaffinch, (1/2) Brambling, (7/16) Greenfinch and (0/4) Goldfinch.
The highlight of the day was amongst the retraps which included not one but two control Greenfinches! The ring numbers were - TR96294 and TH59436. As usual if anybody knows who ringed these two, please let us know either by commenting on this post or by emailing us at mbriggs@gibobs.fsworld.co.uk
Amongst the new Greenfinches was a bird that must have had some "cage Canary breeding" in its ancestry as it had some vivid orange feathers in the belly and chest and showed an orange hue to the leading edge of the first four primaries and two outer primary coverts. Please note that the photos don't really do justice to just how orange this bird looked!
February 1st: Much less windy. A Waxwing and 35 Siskins flew south. Around were 3000 Golden Plovers, a Jack Snipe, 5 Redpolls, a Fieldfare, 4 Redwings, a Goldcrest and 2 Bramblings.
A ringing session at Aylmer Avenue by Dave Vincent (9am until 12.30am) resulted in 17 New birds and 21 Retraps, birds were thus (New/Retrap) - (13/7) Greenfinch, (2/4) Goldfinch, (1/1) Chaffinch, (1/1) Brambling, (0/4) Blue Tit, (0/2) Blackbird, (0/1) Dunnock and (0/1) Robin.
Posted by GPBO Team at 4:06 pm No comments: