28th February. Cloudy, with a strong southerly wind and occasional light showers before heavy rain in the evening. The Kingfisher was mobile between the Mere and Fenland Lagoon. Avocet had increased to 17 on Tennyson's Sands. Southerly migration involved, 60 Lapwing, 60 Starling, 4 Stock Dove, 22 Jackdaw and an alba wagtail down the dunes with 2 Pintail and various waders and gulls offshore. 13 Red-breasted Merganser and 2 Goosander were on the sea. 10 Water Pipit came in to roost. Other notable birds were 2 Stonechat and a Bullfinch around. 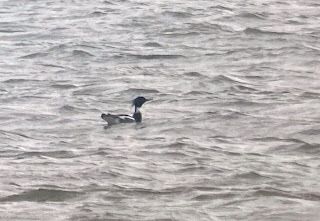 Red-breasted Merganser 28th February. Photo: Nige Lound
27th February.  A bright morning with strong southerly wind. A few birds moving south down the East Dunes including 10 Jackdaw, 5 Chaffinch, 5 Stock Dove, 2 Great Tit and a Rook. 3 Pintail went south over the sea. 2 Woodlark flew towards North Building Ridge where they may have landed and a Kingfisher was a brief visitor to Shoveler's Pool.
26th February. No records received today.
25th February. A bright, sunny morning with a Westerly breeze becoming stronger. A trickle of visible migration was apparent down the East Dunes early morning including a small number of Chaffinch, Siskin, Goldfinch and Jackdaw south with the first Woodlark of the year. . A Goosander went south down the tideline. It was a great day for birds of prey with the usual Merlin, Peregrine and Hen Harrier, but an influx of Common Buzzard occurred, involving 10 birds, at least 7 of which passed south, including 3 together. 4 Red Kite also passed through; one went high south over the beach at 0820, followed by two together out over Millennium Ridge at 1020 and a later bird at 1530. A short while later, 3 Short-eared owls were hunting the Old Saltmarsh with a Marsh Harrier. 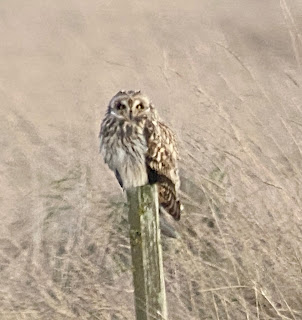 Short-eared Owl 25th February. Photo: Nige Lound
24th February. A calmer morning than of late but with persistent rain from dawn well into the morning. Visibility at sea was reduced but an hours survey prior to 0845 produced 137 Red-throated Diver (99 south), 29 Red-breasted Merganser (10 south) and 180 Eider south. A lone Snow Bunting flew along the beach. A Cetti's warbler was in full song near North Car Park.
23rd February. 180 Brent Geese were on Tennyson's Sands. The Red-breasted Goose having moved down to Wainfleet in recent days. 800 Golden Plover and 300 Pink-footed Geese were disturbed from local fields. 2 Brown Hare were boxing on Croftmarsh.
22nd February. Moderate SW breeze with a dry start to the morning. The highlights of an hour seawatch were a Red-necked Grebe south and a Puffin south with a Guillemot. Various other unidentified Razorbill/Guillemot were seen with typical numbers of Red-throated Diver, Red-breasted Merganser and Eider. A Siskin went south over the East Dunes and another was at the woodland drinking pool. A male Hen Harrier was hunting the Old saltmarsh and a Red Kite passed through. 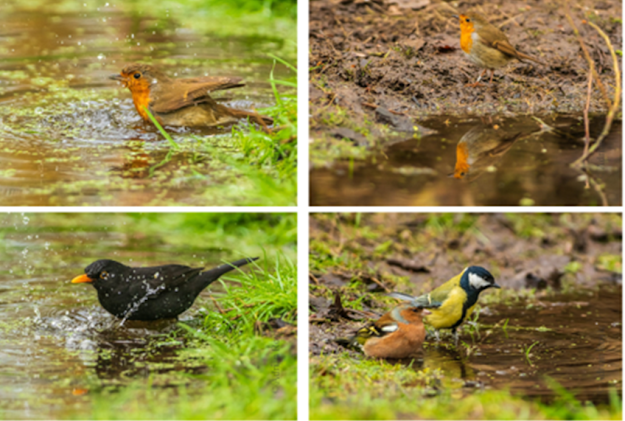 'Bath-time'. Robin, Blackbird and Chaffinch with Great Tit (above), Siskin and Goldfinch (below). Photos: Adrian Royle 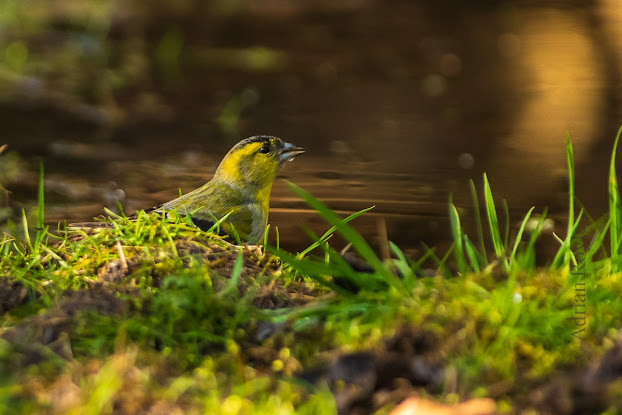 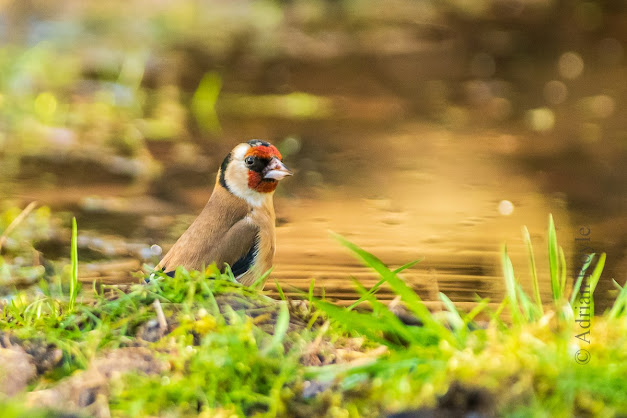 21st February. Moderate to heavy rain with very strong winds again from early on until mid-morning. 2 southbound Goosander and a Goldeneye being the only notable sightings during an early seawatch in atrocious conditions. News from further up the coast indicated a strong Kittiwake movement was underway from early afternoon but coverage was not possible here until between 1630 and 1710. a Total of 260 Kittiwake flew south during that short period, including a single flock of 210 adults, tightly packed and moving slowly south, almost over the beach. 12 Corn Bunting came in to roost in the marsh by the Visitor Centre with a Stonechat nearby and birds of prey were represented by a male Hen Harrier and singe Barn and Short-eared Owl. 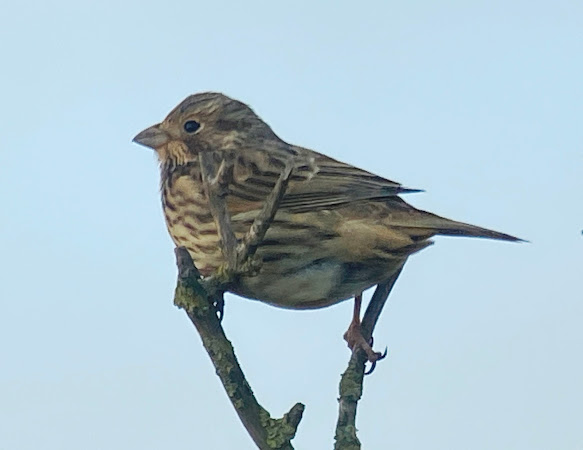 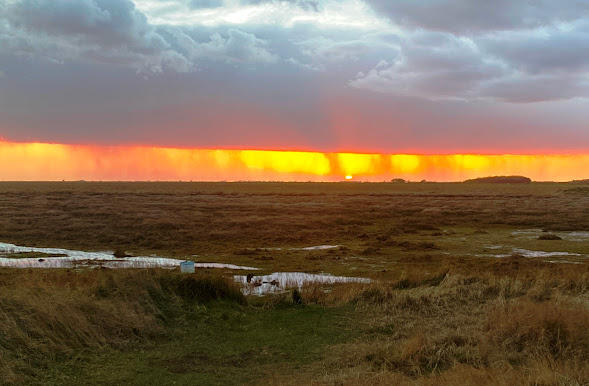 
20th February. SW winds and rain increasing to gale throughout the day with a torrential rainstorm at dusk. The highlights of an hour seawatch 0800-0900 were 2 little Gull and a Black-throated Diver south and 2 Harbour Porpoise. 450 Golden Plover came off the local fields and 2 Coal Tit were together at Aylmer.

19th February. 700 Pink-footed Geese left the roost on Croftmarsh early morning with 2 Barnacle Geese still around. The Red-breasted Goose was with 200 Brent Geese on the River Haven on the dropping tide mid-morning and there were 1400 Eider on the sand bars beyond. Another busy sea-watch for Red-throated Divers, Auks and Red-breasted Mergansers (64), with possibly the same 2 Goosanders making another appearance. Highlights were single Velvet Scoter, Slavonian Grebe and Red-necked Grebe heading south while 35 Snow Buntings were feeding along the shore. A Glossy Ibis was seen flying SSW over the Visitor Centre at around 1050 having been seen earlier further up the coast. At least 3 Stonechat remained and a Barn Owl was seen at dusk.

18th February. Early morning rain was followed by intermittent showers accompanied by the gale force SW winds of Storm Eunice. An hour seawatch in the morning and 20 minutes in the afternoon produced low numbers of the usual Eider, Merganser and Red-throated Diver and highlights of single Gannet and Goldeneye south, 2 Fulmar and 2 Goosander south. A Water Pipit was on Mere Meadow.

17th February. Overnight gales from Storm Dudley had subsided to a strong SW breeze at dawn but this was increasing during the morning with Storm Eunice in prospect. The only evidence of displaced seabirds this morning involved 28 Little Gull and 60 Kittiwake south. A single Med Gull and a a Slavonian Grebe were other highlights offshore, whilst the Red-breasted Goose came in late morning. Elsewhere, a flock of 12 Siskin headed south. 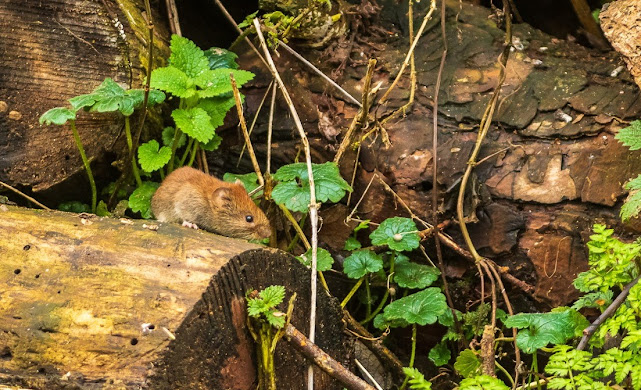 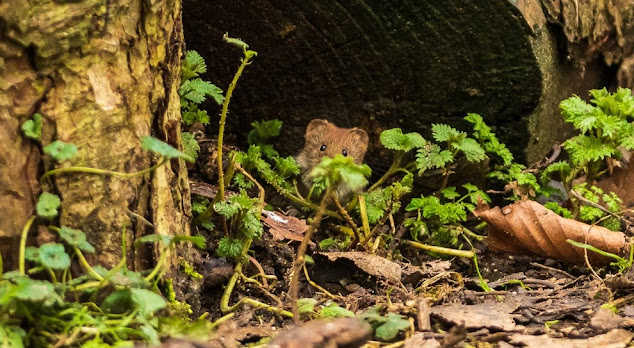 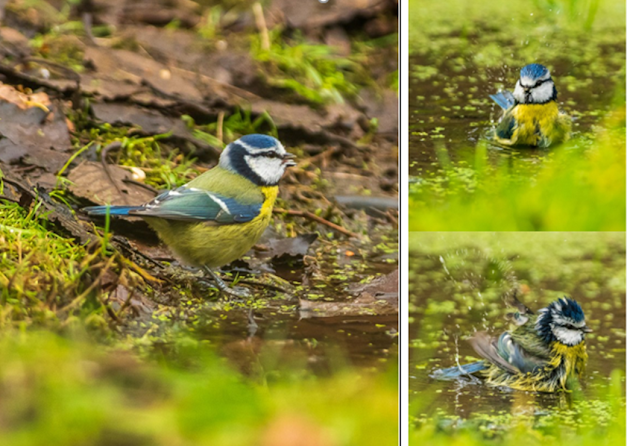 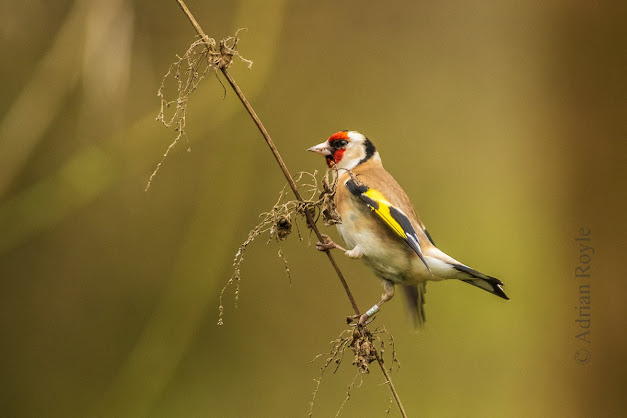 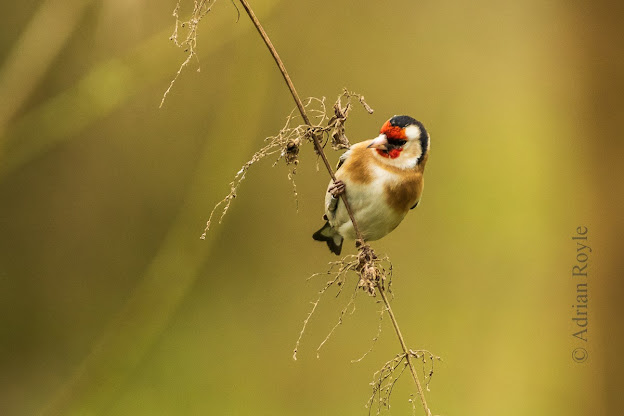 16th February. A very mild morning with a SW wind. An increase of Pink-footed Geese today, with 1200 coming out of the roost on Croftmarsh. The Red-breasted Goose was still with the Brent flock, making at least two visits to Tennyson's Sands today, between 1030 - 1230 and again from 1400 - 1430. A brief seawatch recorded 3 Little Gull south. Otherwise, 3 Woodcock and a Sparrowhawk were seen during a common bird count of the East Dunes. Two Red Kite flew south down the East Dunes together and several Skylarks were in song over the saltmarshes.

15th February. A strong SW breeze with moderate rain from 0900. Following a period of generally low numbers, 600 Pink-footed Geese were on Croftmarsh this morning. Other than that, the only records were form an hour seawatch. Again, plenty of the expected species with the highlights being a Great Northern Diver flying out south-east and 2 Fulmar south. The Red-breasted Goose was reported on Jacksons Marsh around mid-day.

14th February. The Red-breasted Goose remains with the Brent flock - showing well on on Tennyson's Sands throughout the morning and then moving to Jacksons Marsh. A Red Kite passed over Croftmarsh adjacent. The sea was productive again for Red-throated Diver, Great Crested Grebe and Red-breasted Merganser, with a single Black-throated Diver.  At least 1700 Eider were offshore early morning, moving deeper into the Wash later.

13th February. A strong SW wind again with rain commencing late morning. The Brent flock with the Red-breasted Goose visited Jackson's Marsh late morning and looked set to continue the pattern of commuting between the lagoons and local fields. Fair numbers of Red-throated Diver, Great Crested Grebe, Red breasted Merganser and Eider were offshore with a single Great Northern Diver. A Red-necked Grebe arrived from the north and landed distantly.

12th February. A strong SW wind during the morning. Records only received for the sea where an hours watch produced 46 Great Crested Grebe, 15 Red-breasted merganser, 31 Red-throated Diver, 2 Kittiwake and a passage of 570 Herring Gull. Small numbers of Dunlin, Sanderling and Knot were moving south along the shore with the first three Avocet of the year and a Lapwing. The Red-breasted Goose was seen on Jackson's Marsh late morning and again late afternoon.

11th February. The Red-breasted Goose remained with the Brent flock, commuting between Tennyson's Sands and local fields. Also on TS were 6 Bearded Tit and Cetti's Warbler, with a Peregrine settled on Croftmarsh beyond. Two Merlin were hunting the foreshore where there were flocks of 60 Linnet and 18 Snow Bunting. 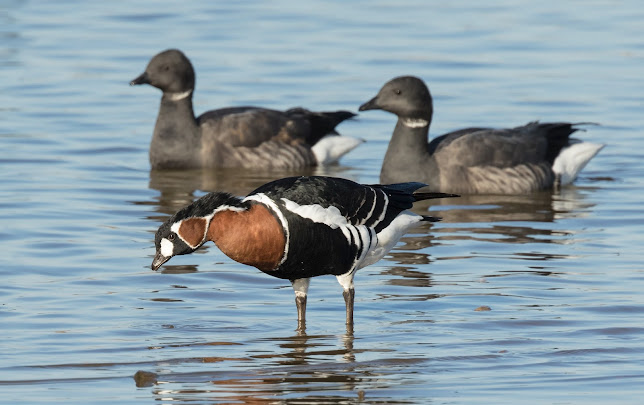 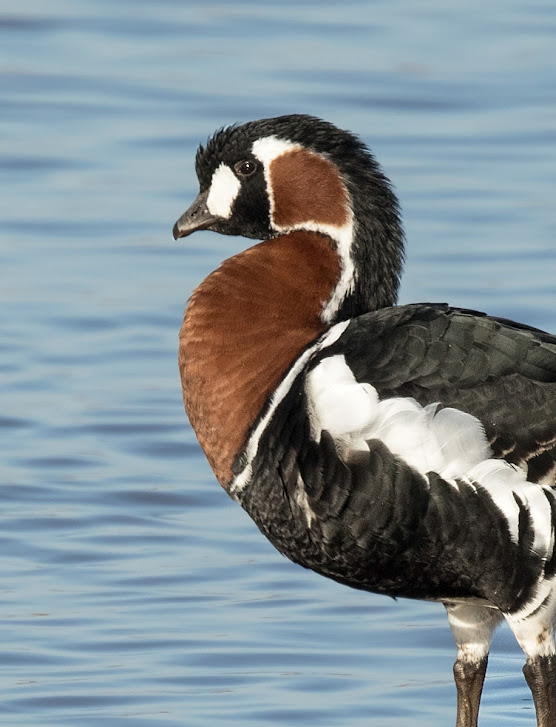 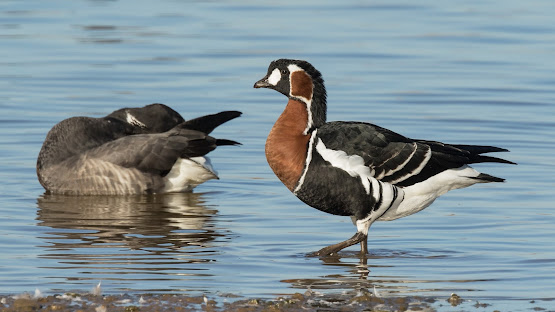 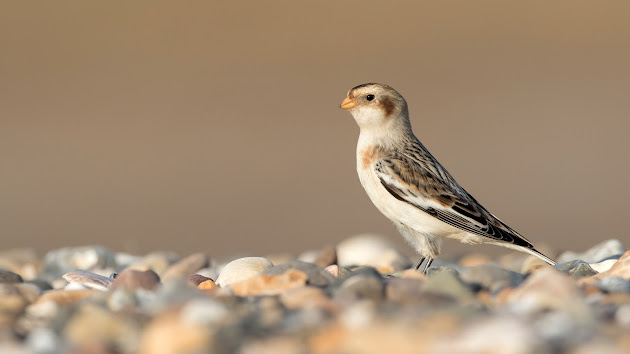 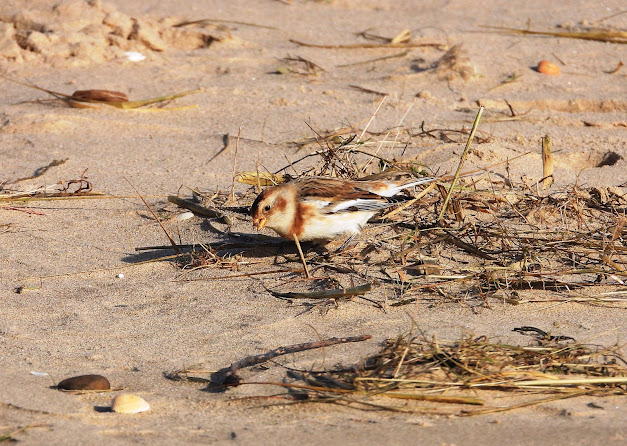 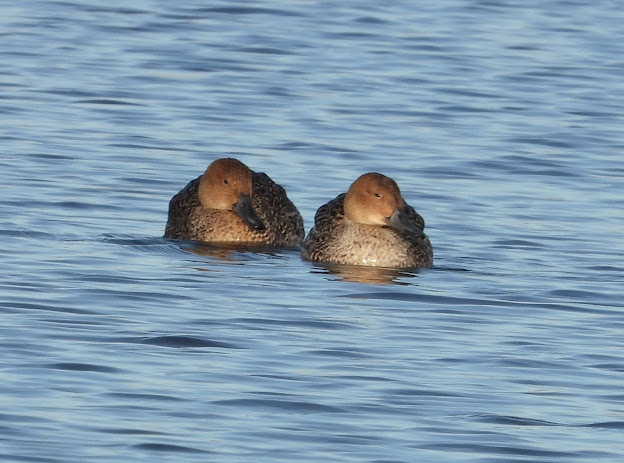 Ringing Info: An Oystercatcher ringed at Wainfleet on 20th August 2005 was found dead on the tideline at Gibraltar Point on 7th  Feb 2022.

10th February. A Red-breasted Goose was again with the Brent flock this morning. Dropping in to Tennyson's Sands lagoon around 0800 and remaining until around 0930, after which the flock was mobile between the lagoons and local fields. Very good views have been achieved from Harvey's Hide. Also around; 2 Barnacle Geese, 2 Hen Harrier, Merlin, Short-eared Owl, 18 Black-tailed Godwit, at least 1 Bearded Tit and 2 Water Pipit. A Fieldfare and 5 Song Thrush appeared to be new arrivals. 11 Water Pipits were recorded, with 9 going to roost late afternoon. 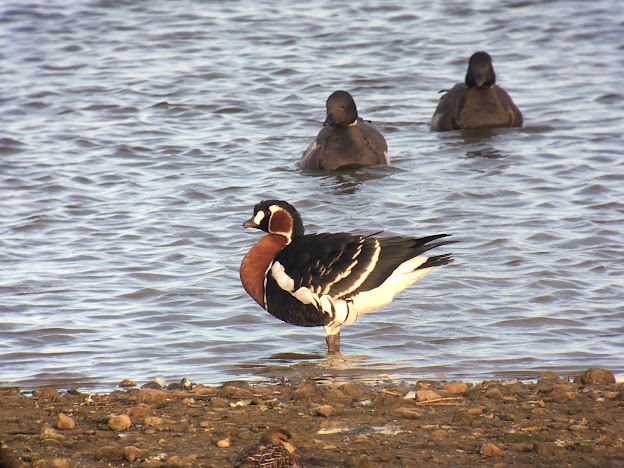 9th February. After an absence of Snow Bunting for a few days, a flock of 19 were seen at the south end of the beach this afternoon. Two Song Thrush were in song and two Great Spotted Woodpecker were drumming. Two Rook flew south, 15 Redwing arrived from the east and headed inland and a Redpoll sp was mobile around the West Dunes.

8th February. Some light 'vis-mig' this morning involved 152 Starling, 3 Siskin, 8 Goldfinch, 2 Chaffinch, 3 Skylark and singles of Rock Pipit and Meadow Pipit south prior to 0900. Quiet offshore except for 900 Eider and a Med Gull south. In the dunes 3 Stonechat and 2 Woodcock were seen and on the estuary 2200 Lapwing with 2000 Golden Plover. A good selection of Birds of Prey included 2 Merlin, 3 Buzzard, a Peregrine and a male Hen harrier. 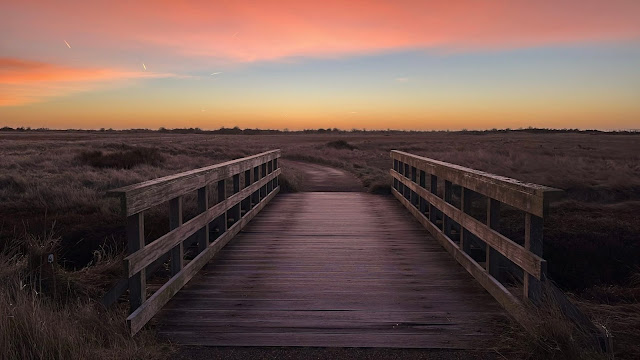 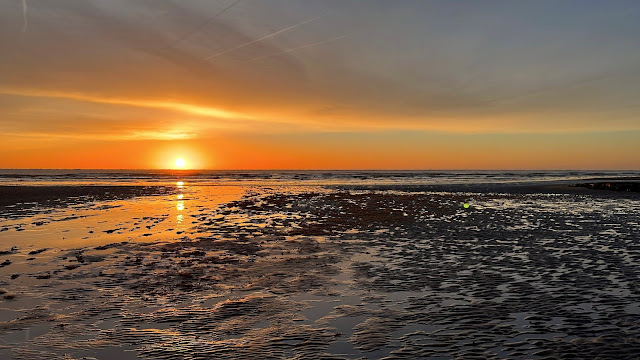 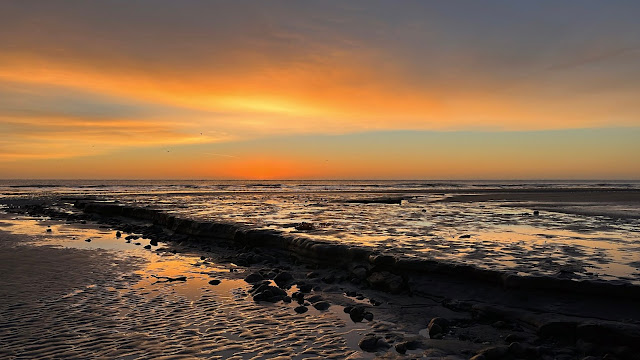 6th February. An early morning sea-watch was generally pretty routine except for a Great Northern Diver close in south and a Puffin flying south, then returning north 20 minutes later. Three water Pipits were located on the north saltings with other highlights being Lapland Bunting, Jack Snipe, Peregrine and 130 Linnet.

4th February. A fairly typical spread of winter birds including hen Harrier, Merlin, 3 Woodcock and Water Pipit. 9 Snow Bunting remained on the beach and 34 Ringed Plover was a good count for this period.

3rd February. At least 1200 Eider offshore this morning with single Great Northern Diver, Velvet Scoter and redhead Goosander south. The Goosander in the company of a redhead Red-breasted Merganser - not an unusual occurrence this winter. Again, two Lapland Buntings around with singles of Water Pipit and Yellowhammer. A short-eared Owl showed well at dawn. A Red Deer along the flood bank was a bizarre sighting - after consulting the Lincolnshire Naturalists Union Mammal Recorder, this must be considered an escapee. 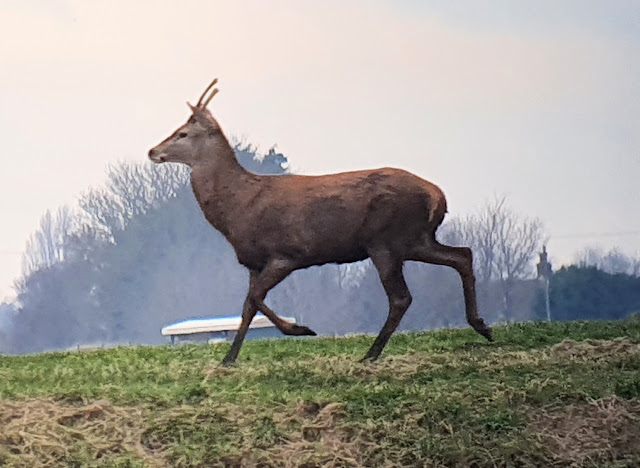 2nd February. A calm and mild morning with little change in bird numbers. Noticeable however was a drop in Brent Goose numbers over the last couple of days, with the Red-breasted Goose no longer present. A Barnacle Goose remained on Croftmarsh with five Black-tailed Godwits also there. A Water Pipit was on the Freshwater Marsh, an alba Wagtail flew south and a Lapland Bunting was mobile. 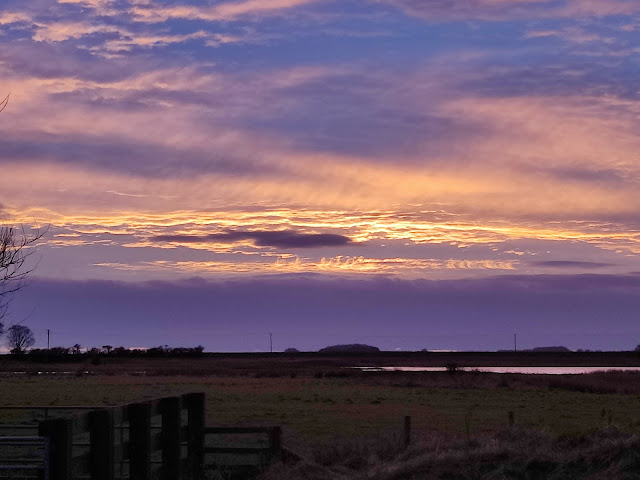 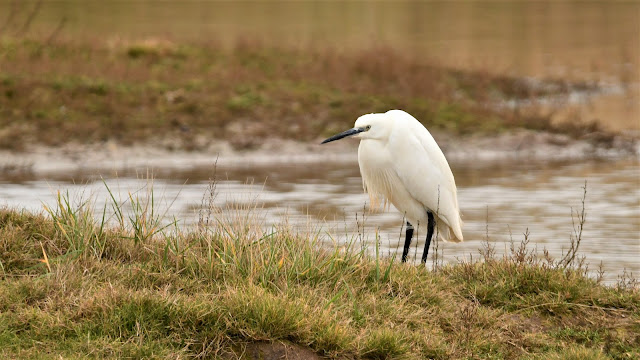 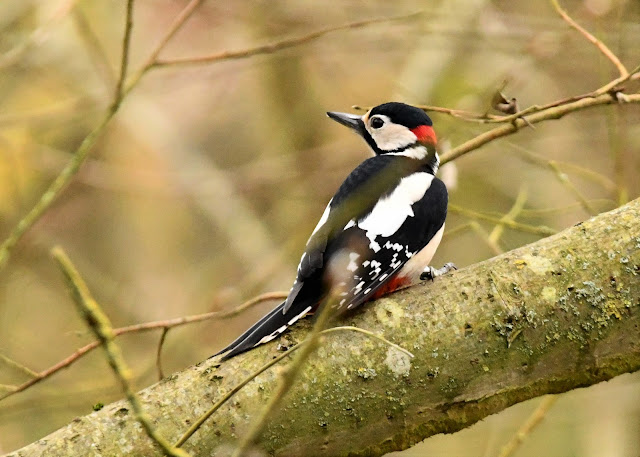 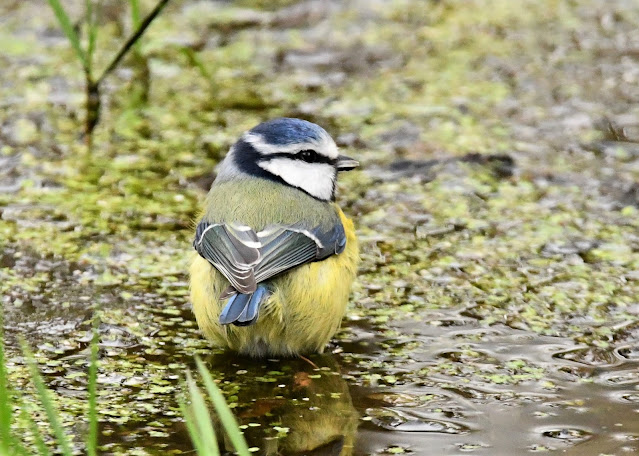 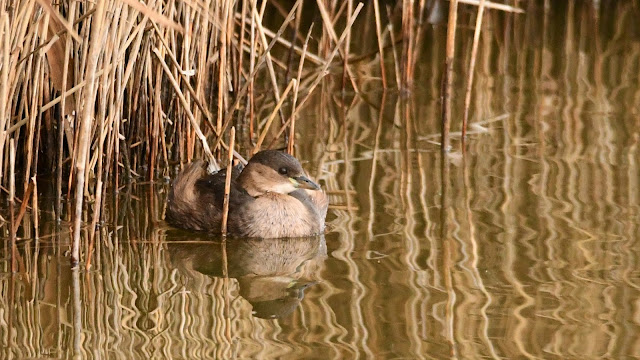 1st February. Strong north-west winds again increasing through the day. The local Eider flock involved 900 birds on the sea, then flying south into the wash early morning on the ebb tide. Red-throated Divers and Red-breasted Merganser numbers remained static but a pair of Velvet Scoter and a male Goosander were new in and flying south. Two Lapland Buntings flew south together and a single Siskin also headed south. At least 8 snow buntings continue to frequent the beach but a Merlin was pursuing the flock ! Good numbers of waders were arriving on the evening tide before dusk including 730 Sanderling and 1850 Grey Plover.